Happy New Years! We bring you a new feature and several bug fixes deployed in December.

Last month was marked by a new feature allowing you to subscribe to hashtags, and we promised to follow up with a feature to configure your feed. With Manyverse version 0.2212.19, we delivered on that promise, and now you can manage your subscribed hashtags. This Feed Settings screen is just the start, we plan on giving you more control on what you see in your feed in the future. 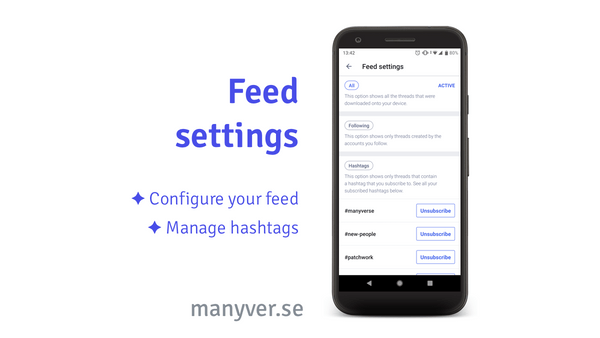 Special thanks to Andrew Chou for nailing both the subscription of hashtags and the new Feed Settings screen. 🤗

We've also been busy with work that's not visible to users, but is important for the future of Manyverse. We setup automated tests for Manyverse Desktop, and began the journey of writing tests for all features. This should help us avoid regressions, avoid crashes, and honestly avoid messing up your experience when using the app.

The "backend" on mobile is handled by nodejs-mobile, which is still stuck on Node.js v12, which has been declared end-of-life some time already. I didn't originally create nodejs-mobile but nowadays I happen to maintain it. Last month I made significant progress in updating it to Node.js v16, and can confirm it already works on Android. Just a little bit more work and it'll be working on iOS too. This library benefits not only Manyverse, but several other peer-to-peer mobile apps, such as Mapeo.

I've been promising to put metafeeds in production for more than a year now, and it seems like they'll never happen, but pressure is building up so that it has to happen soon. Our grant project on Private Groups requires that we have metafeeds in production, and for partial replication (to avoid bloated local databases and out-of-memory crashes) we also need it.

We now have a short list of the last tasks to do, and we're working on them. Metafeeds are a big deal, and we actually cannot get it wrong, because there's very few ways of undoing mistakes. So we're carefully testing and considering the wild corner cases.

Finally, the SSB community in Europe is having a meetup in Basel this month, and I'm going to attend! P2P Basel is organized by veteran SSB community members who are in the Computer Networks Group of the University of Basel, and so far we can confirm that at least these folks will be there: cft, elavoie, arj, decentral1se, cblgh, and myself. If you're based in Europe, don't miss this chance to attend!